Venice, the Procuratie Vecchie open to the public after 500 years

Home / Venice, the Procuratie Vecchie open to the public after 500 years 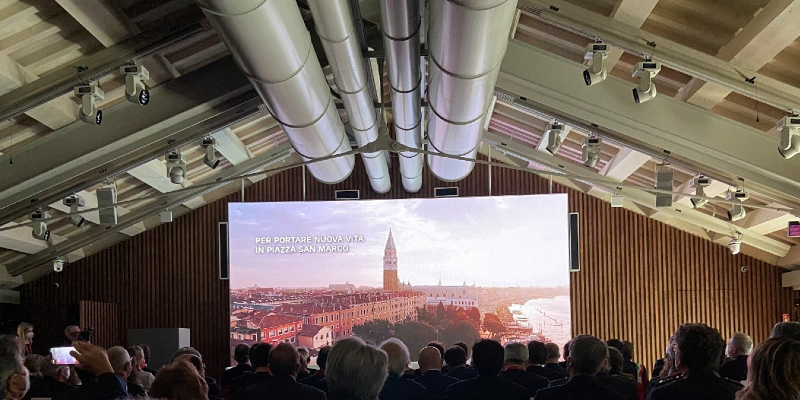 Palazzo delle Procuratie Vecchie in Piazza San Marco was inaugurated on the 8th of April, open to the public for the first time in 500 years, after the restoration works designed by David Chipperfield Architects Milan.

The building will host the headquarters of Generali Group’s foundation “The Human Safety Net,” whose mission is to unlock the potential of people living in a vulnerable condition.

The renovation activities have returned to its former glory the three floors building, 12,400 sqm, integrating in a balanced and non-invasive way the most modern technologies with the structure of the complex, guaranteeing high standards of comfort and the best use conditions for users and visitors of the building.

The inauguration ceremony was attended, among others, by Ministers Dario Franceschini, Renato Brunetta and Massimo Garavaglia, hosted by  the President and the CEO of Generali, Gabriele Galateri and Philippe Donnet, who recalled how this intervention well interprets the meaning of the word “Sustainability” in the mission of the Company: sustainability in the manner of execution of the building restoration works, but also in the new use of the complex intended for social purposes of help to the weakest, returning the building to its original function when the Procurators of San Marco, responsible not only for the maintenance of the structure but also for the assistance to the weakest categories of the city, used to look out of the windows of the second floor of the building.

Also Manens-Tifs participated to the event, held in the auditorium on the third floor, proud of its contribution to the design and implementation of the active and passive acoustic systems and the multimedia equipment installed in this room, thanks to the continuous and meticulous work of Roberto Zecchin and his collaborators. The hall, with more than 230 seats, is characterized by a sophisticated audio-video system with a large LEDwall screen, cameras and motorized stage projectors and Dolby Surround. From the acoustic point of view, the hall is equipped with roll-up sound absorbers, which allow to calibrate the response of the hall itself to the specific needs of different types of events, including musical ones. Everything is managed by an adjoining control room, connected to two booths for simultaneous translation, which will allow the organization of complex events with external connections and streaming transmissions.